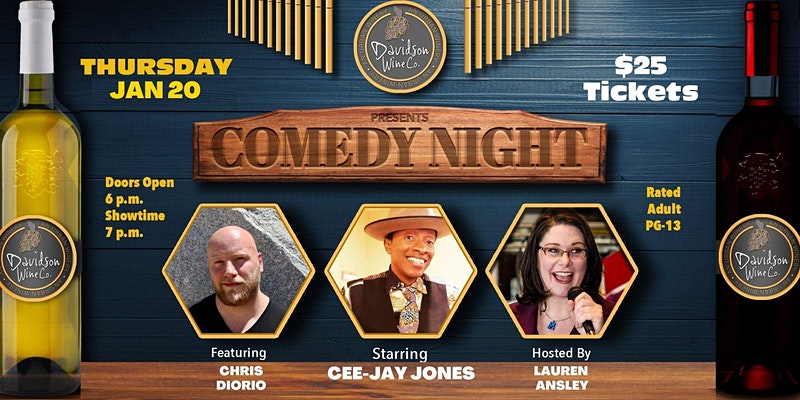 Beerly Funny is thrilled to partner with Davidson Wine Co. to bring our stand-up comedy show to Davidson, NC!

Tickets are $25 per person. Tickets are available exclusively via Eventbrite. Ticket sales are final and non-refundable.

HEADLINER CEE-JAY JONES: A Greensboro, NC native, Cee-Jay Jones is wild and totally outrageous, with a style of comedy that is all his own. His stage presence, quick wit, high energy and rapid fire delivery keeps his audiences laughing non-stop from the moment he hits the stage. Cee-Jay gives you his perspective on how he sees the world, and when he does… your world will never be the same! He’s appeared on BET’s Comic View, Showtime’s At the Apollo and Carnival Cruise Lines.
FEATURE CHRIS DIORIO – Born and raised in Connecticut, Chris Diorio is now based out of Charlotte North Carolina and brings that signature northeast wit to stages all over the country. With a mix of cagey one-liners and unique stories from his past, he keeps the audience on the edge of their seats with clever misdirection and hard-hitting punchlines. In addition to hosting the award winning Sunday Funday Podcast, he is a two-time winner of Elevate Lifestyles favorite comic award, and was featured on the 2021 Testing Negative Tour
HOST & SHOW PRODUCER LAUREN ANSLEY: Based in Charlotte, NC, Lauren Ansley is the founder of Lauren Ansley Presents and Beerly Funny. She has been a featured performer in several comedy festivals throughout the Carolinas, named one of the comedians to know by Charlotte Five and was featured in The Charlotte Observer. Her passion to make others laugh and slight southern accent are only overshadowed by her infectious smile and abnormal height of 5’13”.
+ Add to Google Calendar+ Add to iCalendar+ Export .ics file